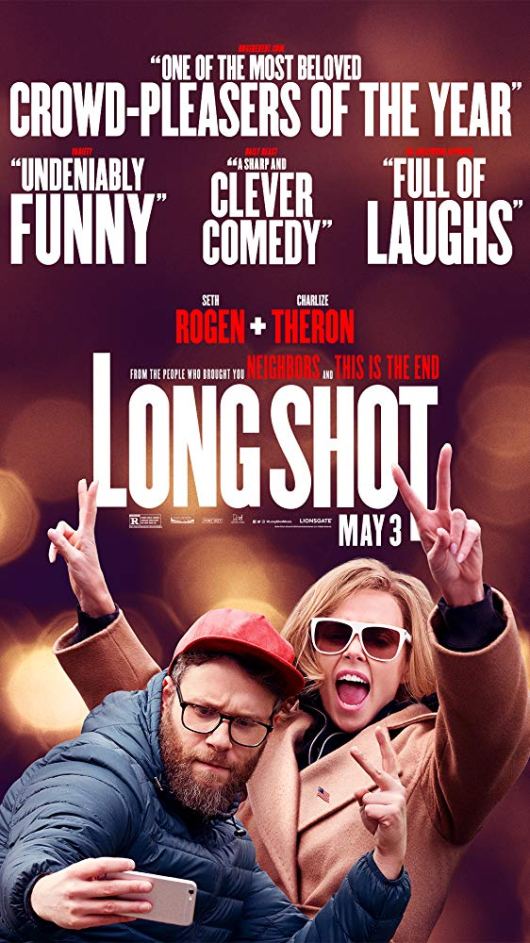 7.5/10 There haven’t been many comedies this year so far and the comedy genre tends to bring about some of the worst movies of the year (i.e.- “What Men Want”) so “Long Shot” is a complete breath of fresh air. Director Jonathan Levine reteams with Seth Rogen for the third time and although I didn’t see their second collaboration (“The Night Before”), their first collaboration, “50/50” was also very good. It seems like these two collaborators make a solid pair. Most comedies have generic or unoriginal stories but by having this take place in the world of politics and journalism, while also sprinkling in the issues of today, this gives the plot a fresh and relevant spin. On paper, having Charlize Theron fall for Seth Rogen sounds ridiculous, seeing as how she is so out of his league. Yet the film does a solid job of not only addressing that to comedic effect, but also genuinely having chemistry between our two leads and making the audience feel like she could go for him because of his passion and sense of humor. One of the most important parts in determining the quality of a comedy is if it is funny or not. I can say that so far in 2019 this is the most I have laughed at a comedy. There are some genuine laugh at loud moments and added to the fact that the film has a heart in terms of the romantic aspects makes this a winning combination. O’Shea Jackson Jr. plays a fantastic supporting character and is surprisingly developed. He is definitely one of my favorite characters in cinema this year so far. Speaking of supporting characters, I had no idea that Andy Serkis was even in the film until the end credits rolled and then I instantly knew whom he played but I was really impressed that not only did I not know he was in the film but that while I watched him the whole time, I had no idea it was him. There was a moment in the film that I thought was going to be a politically insulting jab at half of the country but then the scene takes a totally unexpected but pleasant turn into a heartfelt moment with a message that Democrats and Republicans shouldn’t judge each other based off of their political party but instead as individuals and that was one of the best and most heartfelt moments in the film. As for the negatives, there are a few minor ones. Some of the political stuff is way too on the nose, a couple of moments get a little bit too over the top, a couple of references won’t age super well and this is very minor and maybe more of a pet peeve but it seems like comedy films lately have gotten into a cliché and unnecessary habit of inserting older bands into movies for forced nostalgia and a celebrity cameo and this movie does just that. Whether it was Rush in “I Love You, Man” or the Backstreet Boys in “This is the End” (also with Rogen), this film puts Boyz II Men in the film and it really serves no purpose except for the film makers to get to hang out with a band. It is minor but that trend is starting to get a little tiring for me. On the nose political complaints and some over the top moments in a rather grounded comedy aside, this film has an excellent cast, a timely plot, a decent soundtrack/score, several big laughs and most importantly, a big heart. Take a shot and check out this film.