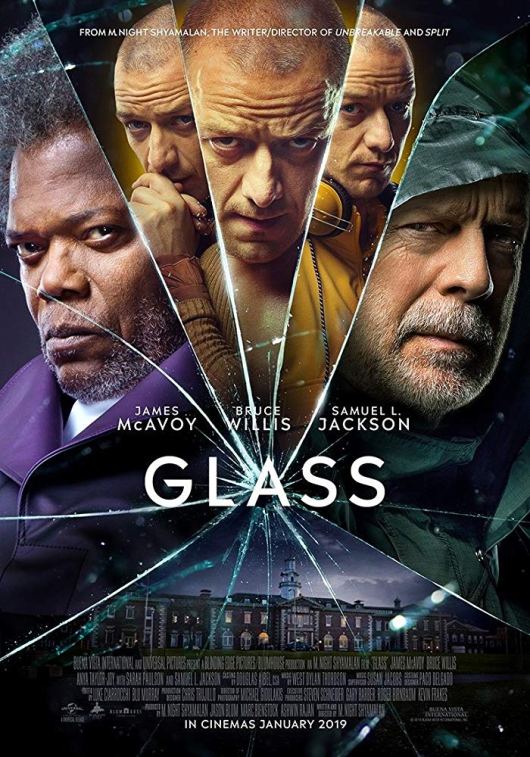 5.5/10 “Unbreakable” is a pretty great and underrated film. “Split” had problems and was flawed but had an amazing lead performance and was very entertaining. So it’s with a sigh of disappointment that I must report that the conclusion to this trilogy, “Glass”, falls short of both of those films. It does have some strong aspects going for it. Right from the beginning and throughout the movie, the score is extremely well done. I’m bummed that M. Night didn’t keep up his relationship with composer James Newton Howard but the music here is still first rate. James McAvoy once again gives an amazing performance that in some ways is even more impressive than his fantastic performance in “Split”. Our other leads and co-leads do a fine job but McAvoy really is the standout. The cinematography and editing during the fight scenes are also very clever, well done and allows the audience to see what is going on, which is refreshing. So from a technical stand point, “Glass” is pretty solid. So why the 5.5/10 rating? The story and plot, particularly the ending, really sink this movie. Without giving too much away, after seeing “Escape Room” a couple weeks ago and now this, I am really getting sick of these secret society groups that have crazy amounts of power, wealth and influence that can do whatever the Hell they want with no oversight. Secret societies in films are so lazy because you never have to explain their origin or their practicality. You can leave plot holes unfilled by just reverting back to some random secret society that we know nothing about. This secret society was also never hinted at throughout this series so for it so show up is completely out of left field. It’s also worth noting for a psychiatric ward that is holding mass murders, the security on display here is on par with Marjory Stoneman Douglas High School. At one point, James McAvoy is wheeling Samuel L. Jackson out as a guard looks at them and does nothing. Wouldn’t you recognize these guys from the news? You literally are a guard where they are so you should know who is locked up in there. Really stupid. The first half of the movie starts off stronger by bringing the main players back together and seeing them interact with each other but the second half of the movie falls apart as what happens to our three leading characters is rather anti-climactic. The whole ending of this movie which is wrapping up an entire epic trilogy is so underwhelming that you just have to shrug your shoulders once the end credits start to roll. There are also some unanswered questions that the movie never addresses (how did the cops get there so quickly/know where to go in the opening fight of the movie?!). I also hate that Shyamalan thinks he is Hitchcock (you are far from it, buddy) and keeps forcing himself into his movies with pointless cameos that only distract and take us out of the movie. This movie had a lot of potential but this weak link in the trilogy barely crosses the finish line. Here is to hoping Shyamalan takes some time off before his next film so he can come up with something better concocted than this.