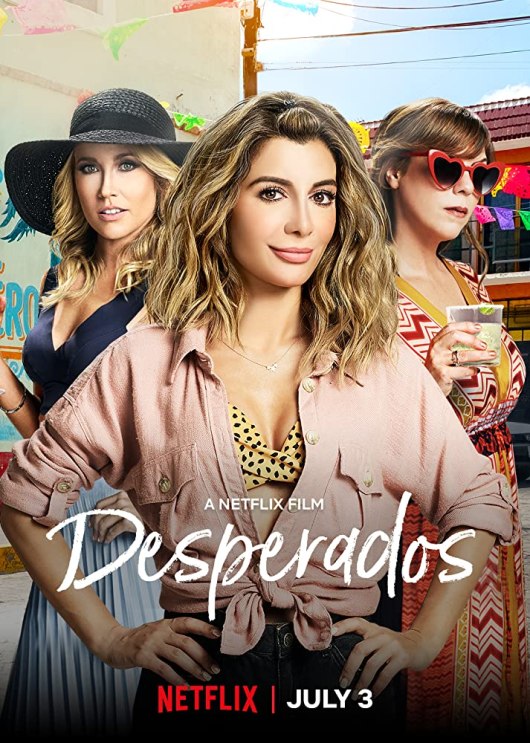 1.5/10 “Desperados”, stemming from Mexican origins, meaning “despair” (not true) describes how you will feel watching this disgraceful piece of crap parading as a movie. Whenever I hear that Netflix passed on a project, I just look at something like this and wonder what the Hell their criteria is to greenlight a project because clearly the bar is low. At the end of the opening credits we see, “Directed by LP” which I can only assume stands for Lousy Parody. If it was written by LP as well then I would assume it stood for Lazy Penmanship since this script should have been used to wipe peoples’ asses during the toilet paper shortage back in the spring. That way at least it would have been useful to at least one person. This “comedy” is so unfunny, immature and lazily written that not only did I not laugh one time but I didn’t even crack a smile. The only thing I wanted to crack was crack open a beer to drown the misery of having to sit through this. Or actually taking crack would have been a better option than this. If you are longing for some intelligent, witty, thought provoking comedic bite with some philosophical social commentary layered over it…then look elsewhere because in this movie you get a dolphin’s erect penis slapping a woman in the face. If I was eight years old and my mom did an obscene amount of meth while pregnant with me, I would probably find that hilarious. But fortunately I have taste when it comes to comedy so this just made me cringe. Jokes are unoriginal or completely fall flat and there are so many convenient coincidences which just highlights the script’s laziness. The movie is also extremely predictable if you have seen more than two romantic comedies in your lifetime so you will know who our female protagonist ends up with about 15 minutes into this chore of a viewing. In the beginning of the movie we find out our lead (who gives a poor and uneven performance I might add) has financial problems due to past gambling, being out of a job and having her car get wrecked. Yet, when she goes to Mexico with her two friends, they stay in a completely lavish and expensive villa that would break a normal person’s bank, let alone someone with no money. Maybe her two friends paid for it all because even splitting it evenly three ways would not have been an option for her but the movie doesn’t care to explain things like that because it is too busy being awful, over the top and unrealistic. The only decent aspects are the performances from our protagonist’s two female friends (Sarah Burns and Anna Camp) as well as the movie’s best performance from Lamorne Morris, who is very likeable and charming in this. The pacing is also fairly lean so you will be entertained the whole time, even if you are simultaneously shaking your head due to how garbage this is. Like a mean spirited, inappropriate email you regret sending, this is one cinematic experience I really regret undertaking.