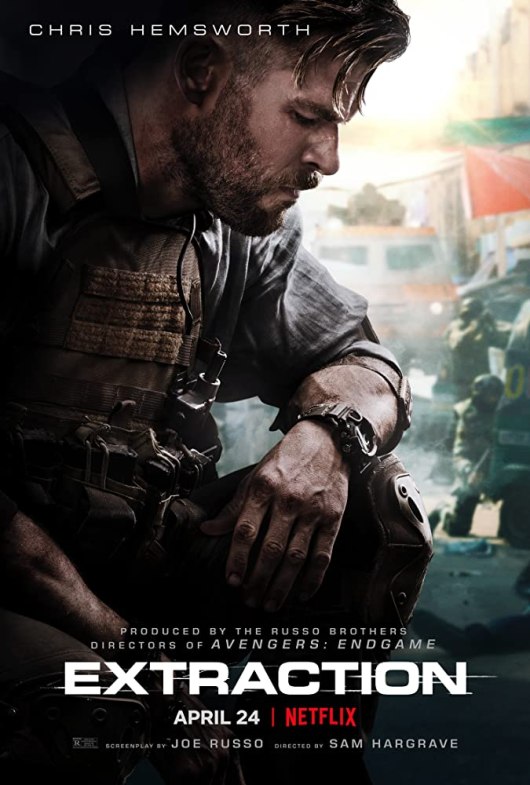 5/10 Celebrated as the most viewed Netflix original film to date, “Extraction” is so successful that a follow up (sequel or prequel) is quickly being planned but I believe its success has more to do with the lack of new film releases and less to do with the actual quality of this movie. In the end, “Extraction” ends up being about as mediocre as a movie can get. Half of it works and half does not but due to how entertaining it is, I can see why it has been such a draw for audiences stuck at home quarantining. In terms of what works, Chris Hemsworth has some great screen presence and proves that he doesn’t need a bunch of Avengers around him to carry a movie. He gives a layered performance while making the action scenes look easy. Not a lot of movies take place in India (or are filmed there) so the setting provides a unique change of pace for this action flick. The action takes a page out of the “John Wick” franchise book, which is very smart. The cinematography and editing work brilliantly together so we can see the well-choreographed action unfolding without a bunch of shaky cam or jump cuts like the films of Paul Greengrass or Tony Scott foolishly have used in the past. It is always better to see what is going on instead of struggling to get our bearings on what is happening and where. The pacing is constantly moving, which keeps the entertainment value high as we remain glued to our screen. Even though the action works and the cast brings their A game, “Extraction” falls flat in other areas. The plot and characters are very generic and we have seen this basic plot many times before. Even though he has lost a child, our lead protagonist doesn’t have much of a personality other than being tough and kicking ass. Likewise, our villain is so one dimensional that I wouldn’t be able to tell you anything about what drives him or what makes his personality stand out. An action hero rescuing someone and having to get them to safety has been done a million times before and this movie knows its strength lies in its action as opposed to its run of the mill plot. We don’t care all that much about any of these characters because we don’t know them well enough. This movie is a heavy dosage of style over substance, in the same way many Michael Bay films have turned out. One moment near the end has a male character underwater in a pool, holding his breath which is meant to mimic an earlier scene in the movie. As much as I appreciate symmetry and movies having aspects come full circle, this moment felt forced and unnatural. As much as the violent action, fight choreography and acting really worked, I wish another pass would have been done on the script so the characters and plot could have been way less generic and forgettable. If someone were to edit all of the action scenes onto a YouTube video that lasts 45 minutes, that would be more worth watching that the entirety of this movie since nothing else stands out. Here’s hoping the screenwriters use their quarantine time to make the follow up more well-rounded and noteworthy.