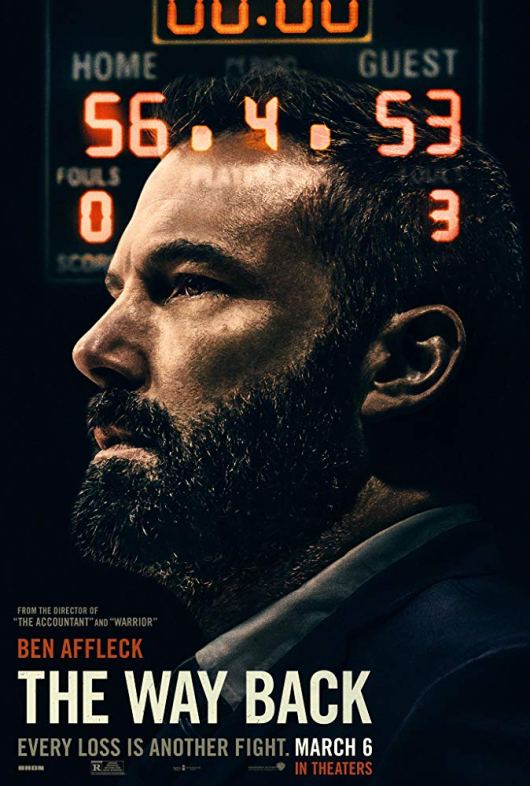 7/10 Sports films have been done to death, but “The Way Back” is more of a drama about loss and alcoholism that uses basketball as the backdrop, which really strengthens the film and prevents it from falling into all of the clichés that generally comes along with sports dramas. This film isn’t perfect but it is very moving, emotional and even lead to me to tears at one point. Ben Affleck, in a role that mirrors his own struggles he has had with alcoholism over the years, is terrific and gives a strong, subtle performance which relies on minute facial expressions as opposed to grand gestures and speeches. Affleck brings the character to life as we see his highs with the basketball team and the lows with his substance abuse. I thought near the end that the film might stray into predictable territory but I was happy to see the film diverge from that path and go its own way. The final scene that the film ends on was perfectly intimate and uplifting. The film’s score never overshadows the film but instead, adds a nuanced layer to it, which I really enjoyed. As someone who has had his own battles with alcohol over the years, I got a lot out of this film on a personal level. That of course won’t be the case for everyone and there were definitely elements I didn’t relate to (a loss the main character suffers, divorce, basketball, etc.) but those elements were well done enough to make us in the audience feel the emotional ripple effects of all those subplot points. There were some minor issues that the film struggled with, but nothing that greatly detracts from the overall enjoyment you will get out of the film. Without getting into spoilers, there are a couple convenient moments in the script that I didn’t buy that briefly took me out of the film. It isn’t the most memorable film and due to its subject matter, probably won’t be one worth revisiting multiple times. Finally, it gave off shades of “A Star is Born” (2018) in terms of the substance abuse, but I feel like that film was a little stronger in how it handled those aspects. Not to say this film handled them poorly (it didn’t), but when the film you’re watching makes you think of a better film, that isn’t great for the film you are currently watching. Like I said, the flaws are rather minor and this is definitely a film worth seeing. The disciplined direction, strong lead performance, emotional resonance and uplifting message should have you find your way back to the theater to check this out.