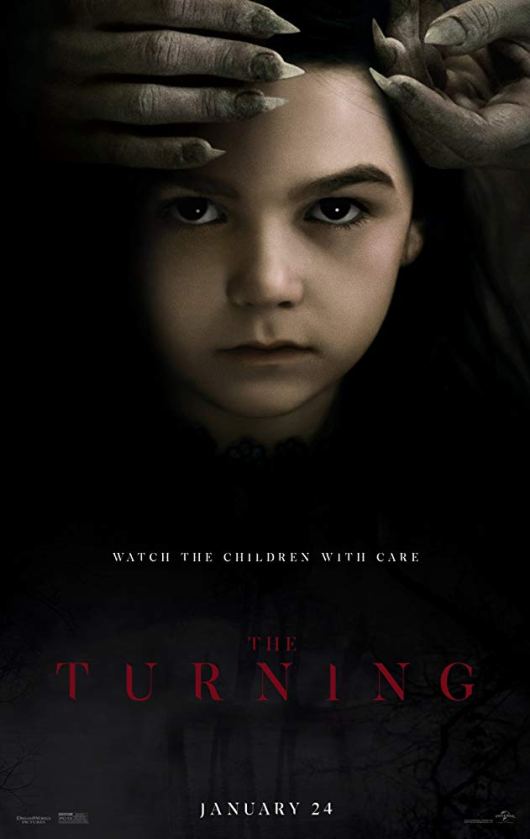 1.5/10 January horror movie releases are notoriously known to be awful but “The Turning” sets a new low. I’ll get the positives out of the way first since there are so few of them to talk about. Mackenzie Davis (“Terminator: Dark Fate”) and Brooklynn Prince (“The Florida Project”) give solid performances and the pacing moves things along at a thankfully quick pace, so we don’t have to suffer long. Besides the pacing and performances (Finn Wolfhard has nothing to work with here with this script and therefore underwhelms), everything else is a disaster. I haven’t read “The Turning of the Screw”, upon which this movie is based but since it is known as a horror classic, it must be a fairly solid book. To adapt it in such a garbage way is really baffling. None of the characters are likeable. Mackenzie Davis plays Kate, who starts off as a likeable character but then devolves into a complete moron when she decides to stick around in a clearly haunted house where ghosts are trying to kill her but she made an eternal promise to a small child so I guess she can’t leave the house or something? The two children she is babysitting are almost as demonic as the ghosts that haunt them all. Flora, the little girl goes back and forth between super sweet and super agitated/stand offish like an emotional pendulum while Miles, her brother is a complete jerk from start to finish. At least if the kids were likeable we might understand Kate wanting to stick around for their sake, despite all the evil things going on. However, since both kids deserve Casey Anthony as a babysitter, it makes no sense for Kate to stick around. The score/soundtrack feel like they are from a 1990s horror movie and are instantly forgettable. There are so many horror movie clichés from a kid killing an animal to a kid drawing creepy pictures to a ghost popping up in the reflection of a mirror when a character in front of the mirror bends down to a creepy basement to the part of the house that is off limits and shouldn’t be explored, etc. There is absolutely nothing we haven’t seen before but the most egregious aspect of the movie is the ending. The movie basically shows two endings, one right after another but doesn’t tell you which one actually happened. One is the happier ending and the other is just jumbled and muddled and makes no sense. The confusion of the ending and how it is slapped together blew my mind at how many people signed off on a garbage script with that ending for the movie. If Natalie Portman shows up at next year’s Oscars ceremony and her dress has writer/director Floria Sigismondi’s name on it (who made this travesty), then I think Portman should be kicked out of the Academy because not all movies directed by women deserve recognition. In fact, some of them, like this one, need to be called out for how awful and terrible they are so if you’re thinking of driving to go see this…turn around and go home.