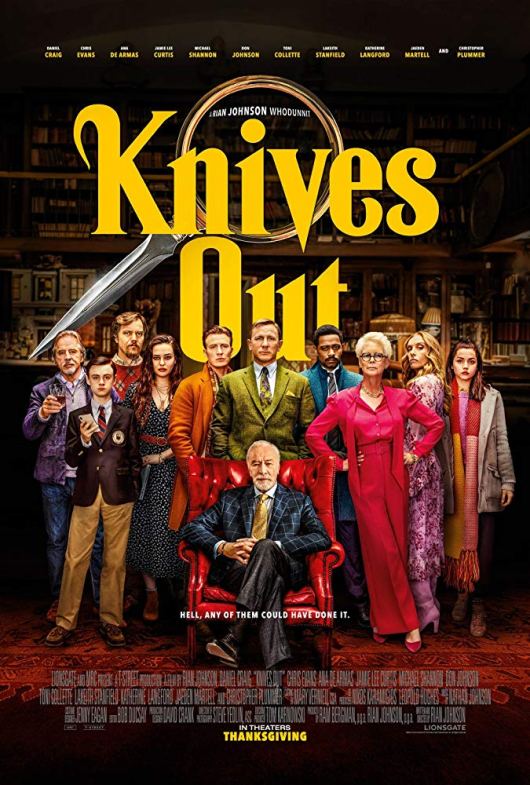 7/10 Writer/director Rian Johnson has simultaneously made some great, intriguing films like “Looper” while also helping destroy the legacy of Star Wars with “The Last Jedi”. So it was with mixed feelings that I entered this film, not knowing which Johnson would show up. Even though the film doesn’t reach the quality of some of his best works, “Knives Out” is a good film and a huge step up from his last effort. I personally love mystery films because not only are they a rarity these days in cinemas but a lot of films are predictable so to try to figure out who the murderer is and piece the clues together is an exciting proposition. The Agatha Christie style whodunnit is a very original story, which is the film’s greatest strength. The ensemble cast assembled for this feature is also very impressive and you can tell that Daniel Craig is having a blast here. There are some genuinely funny lines of dialogue which was both welcomed but also made me wonder how the same guy who wrote these great lines wrote completely unfunny ones in “The Last Jedi”. The family’s bantering dialogue back and forth was extremely well done and this felt like a real family full of terrible people. Ana de Armas gives the best performance of the film and of her career so far as she tackles a wide range of emotions and is the heart of the film. She has been a rising star for a few years now and this film cements the fact that she’s not going anywhere. The score and cinematography fit the genre well and completely immerse you into the feeling of being thrust into this murder mystery. I loved how the film reveals how the patriarch truly dies about halfway through, but there is still so many more pieces of the mystery left to solve. When the big twist is finally revealed, everything makes sense and lines up perfectly. Johnson definitely took the time to construct an air tight story, which was impressive. Despite the successes this film accomplishes, it still has some issues worth noting. The most glaring is the forced political social commentary that is shoe horned in for no reason and with absolutely no subtlety. When the film tries to get political you just have to roll your eyes and wait for it to get back to the interesting plot that we came to see. Some of the supporting characters are also not developed at all, particularly the two youngest members of the family. They come across as character descriptions (liberal college student and alt right Nazi boy) and that is essentially all we learn about them. You could cut their characters out and very little would change in terms of the overall story. One character who ends up being the villain has some of their intentions given away by acting so strangely, raising the audiences’ internal alarm to know something fishy is going on with them, which slightly takes away some of the element of surprise. A few moments with the family are out of character and the puking condition was pretty farfetched. I would tend to recommend something like the 2017 murder mystery, “Murder on the Orient Express” over “Knives Out” because that film focuses on the mystery and leaves the needless political commentary out of it. “Knives Out” is still worth seeing for all that it does right and Johnson has stated he has considered doing future films with the same lead detective, which I would welcome. Anything to keep him away from the Star Wars franchise and I will be happy. This knife may not be perfect but it is rather sharp.