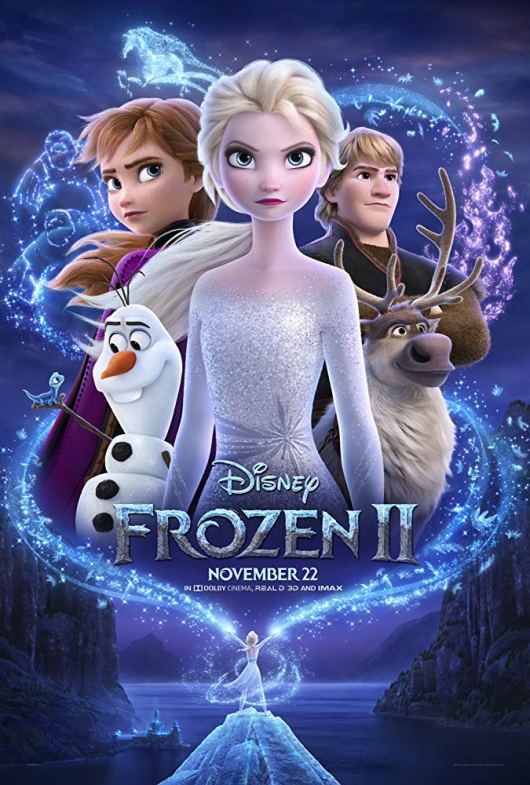 4.5/10 I had the fortune of seeing the original “Frozen” opening weekend back in 2013 when I got back from deployment, before everyone over hyped it to death. The original film is a really good film, which makes this sequel all that much more disappointing since we’ve waited over half a decade for such mediocrity. What made the first film work was that with the exception of a couple songs (the opening ice ode and the troll song), the soundtrack was catchy and amazing. The characters also had relatable story arcs and the emotional drama between them all was very compelling. Here, there are only two or three songs that are great (“Lost in the Woods” is the best with “Into the Unknown” and “Some Things Never Change” also really solid) but the rest of the soundtrack is completely forgettable and you won’t want to revisit any of the other songs. Instead of having a story focused on the drama between these characters teaming up to take on a common enemy, the plot throws all of its eggs into the magical/spiritual powers basket, which is relatable for absolutely no one since none of us have ice powers. The backstory heavy plot just isn’t engaging or interesting enough, especially compared to the first film. Going forward with the story would have been a more interesting proposition vs. looking back at things we care less about. There is also no villain for our characters to have to join forces to fight and even worse, most of our characters get split up so we don’t even get to see the fun interactions between them all. Kristoff is barely even in the final 40 minutes of the movie, for example. They give Olaf a subplot where he is inexplicably maturing and getting smarter (despite having no brain or real capacity for higher learning) and it just comes off as really strange, random and not particularly funny. Even though “Lost in the Woods” is the movie’s best song, they portray it in the style of an 80s power ballad, which while amusing, feels really out of place with the tone and setting of the movie. An adorable salamander creature is only in this movie to sell toys to kids and that is extremely apparent. The overall plot also seems a bit overly complicated, especially for a movie primarily aimed at kids. All of these problems leave you feeling cold but there definitely are some redeemable features. The animation looks absolutely stunning and is a step up from the first film. The few songs that work are really wonderful. The running time is the same as the first film’s (an hour and a half) so the pacing is great and you’ll never get bored. The voice acting and new additions to the cast do a great job and the opening flashback with the girls’ parents is a strong start to get you hooked right off the bat. If there is a third film to make this into a trilogy, I hope they can bring a more relatable and interesting story with a stronger soundtrack. This is worth seeing just to see how it is and your kids will love it, but you are much better off re-watching the original, superior film.