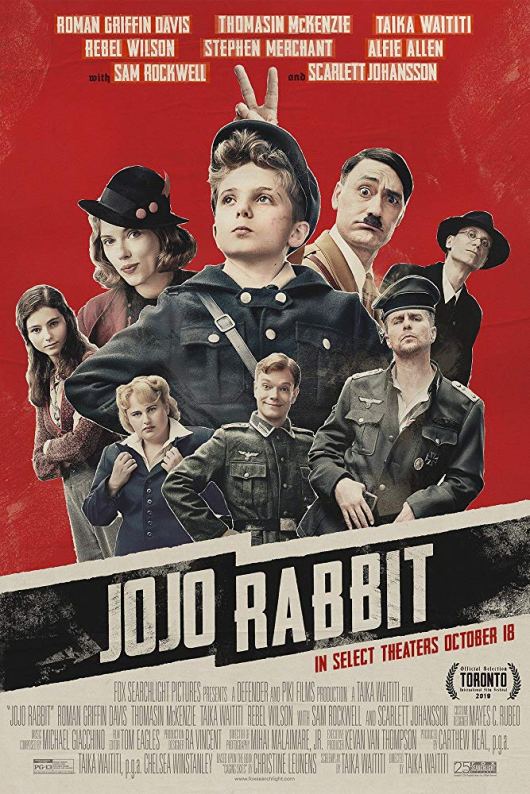 6/10 “Jojo Rabbit” was a very surprising movie for me to watch. Based off of the trailers and what I knew, I wrongfully assumed that this would be an entirely comedic experience poking fun at hatred and the Nazis. By the time the end credits rolled, I realized that the comedic aspects for me mostly fell flat and instead it was the dramatic, serious elements which really elevated this movie. Coming off of “Thor: Ragnarok”, a movie I was not a fan of and didn’t find funny at all, had me worried about this movie. Similarly, a lot of the attempts at humor fell flat for me, especially everything relating to imaginary Hitler. The young boy’s chubby friend added the most humor that I enjoyed to the movie but pretty much every other attempt left much to be desired. Where the movie succeeded was in its serious, emotional moments that show you this isn’t just a silly comedy, but instead a dramedy with something to say. Another highlight was the acting. All of the child actors are phenomenal, particularly our lead boy. The bigger name adults are all solid as well, even if some of their German accents felt more like an impression of a German accent vs an actual one. The score, production design, costume design and soundtrack were all great and set the mood of the movie expertly. Another problem this movie had was with its tone. The best parts were the darker moments reminding you that WWII is going on and our characters are in a very violent and dangerous time period. These great moments were based in realism. However, we then get these completely over the top, silly, unrealistic moments that were based in fantasy, conflicting with anything realistic the movie tries to portray. The movie wants to have its sauerbraten and eat it too, trying to have both realism and fantasy meshed together in the same universe but it doesn’t completely work as we jarringly jump between the two. I actually think that if writer/director Taika Waititi would have ditched the comedic elements and made this more of a drama with a sprinkle of humor to lighten the mood that this movie would have been much better. If the entire movie were based in realism and still had a moral lesson to tell, the final product might have turned out better. Many aspects of film making on display do work here but the lackluster humor and tonal issues hold this back from being so much more. The movie’s Oscar chances, like its Adolf Hitler, seem to be imaginary to me.