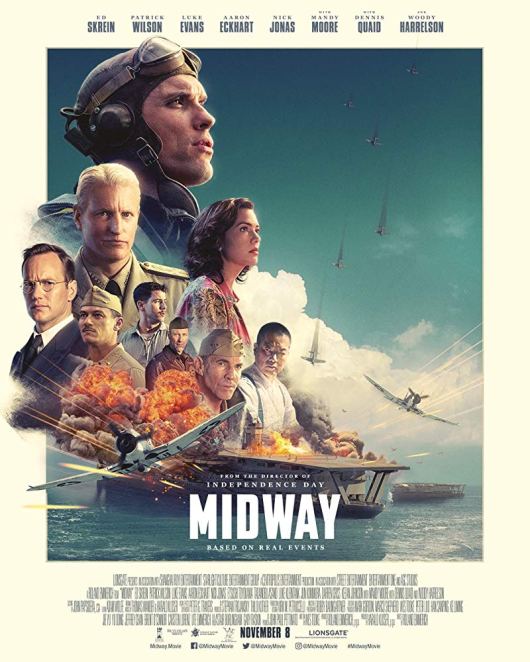 6.5/10 It has been 43 years since the last adaptation of the battle of Midway, despite the battle showing up in several other films. I did find this to be better than the 1976 version and better than I was expecting, even though it still had some problems. Director Roland Emmerich is best known for his mindless, spectacle driven disaster flicks such as “Independence Day” and its sequel, 1998’s “Godzilla”, “The Day After Tomorrow”, “2012” and more. His best film, “The Patriot” excels over all of his other films because it set aside the CGI driven popcorn entertainment with a serious, character driven film set in history (even if some liberties were taken). Emmerich hasn’t been this solid since that film but luckily here he returns to a serious tone with some fascinating historical facts not previously seen in prior films on the subject matter. He has assembled a great cast (although Aaron Eckhart is barely in this) and taken this film’s content very seriously, as he should. This isn’t just some mindless action film. It is a retelling of the events leading up to, including and following the battle of Midway. History buffs will get a good amount out of this film. The costume and production design are fantastic, Woody Harrelson and Patrick Wilson stand out for their terrific performances, Emmerich shows some solid restraint and the score is appropriately bygone and patriotic. The film does have its shortcomings, however. The weakest element of the 1976 “Midway” was the romantic subplot. One is included here and although when Mandy Moore is onscreen her character is given more of a personality than just a generic wife role, her time with her husband is so limited that we don’t care all that much about their relationship and for an over two-hour film, cutting that subplot may have benefited the film. Hearing British Ed Skrein’s strange and annoying accent paired with Dennis Quaid doing his best Nick Nolte impression was also a bit jarring and took me out of the film at moments. In regards to the CGI, the film makers did the best they could with budget restraints but when you see the action unfolding onscreen, you know you are constantly looking at CGI, as opposed to the practical effects and realism that 2017’s “Dunkirk” provided. To be fair, “Dunkirk” had far less explosions, sinking ships, dog fights, spectacle, etc. than this film but I wish “Midway” would have utilized more practical effects when permissable. When it is all said and done, this is one of Emmerich’s better films and if you haven’t seen the original “Midway” or the superior “Tora! Tora! Tora!”, this is worth checking out. If anything it is great to be reminded of how brave and heroic America’s military forces were and have been throughout history. Too often we forget about the sacrifices others have made for our country and if watching a film for a couple hours can be a humbling reminder of that, then anchors aweigh.