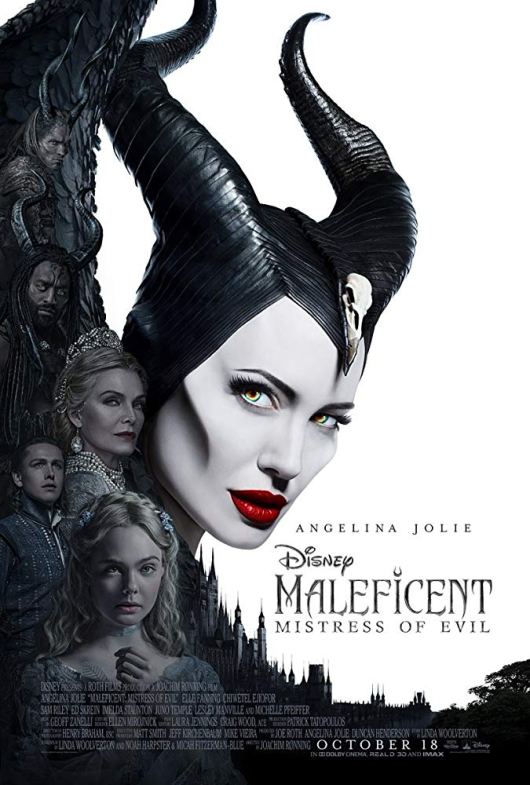 3/10 The first “Maleficent” was a unique twist on the Sleeping Beauty fairy tale that combined some darkness with some real emotional heart to it which ended up being a very decent film that holds up well. Unfortunately, five years later, this completely unnecessary sequel that no one asked for wastes the talents of Angelina Jolie, Elle Fanning and the rest of the talented cast. The plot is nothing original and borrows from everything from “How to Train Your Dragon: The Hidden World” (Look! An entire hidden community of creatures like me!) to “X-Men” (The humans will never accept us so we must destroy them!). The first film was also the perfect running time but this over bloated sequel runs roughly 20 minutes longer and you feel its overly long running time. The actor who played the male love interest to Aurora, Prince Phillip, is recast and replaced by some no name actor who isn’t as good looking or charming and comes across as so bland that the chemistry between the original Prince Phillip and Aurora is completely gone. The direction, score and cinematography are bland and forgettable and the CGI is overused and looks very CGI-ish, especially near the beginning of the movie. The movie has many scenes at night that are so dark, it is hard to tell what is going on (the opening scene in particular). Some full moonlight would have definitely helped. The villain was predictable (as was the entire movie) and in no way memorable or intimidating. The villain has a red headed, young henchwoman who was annoying for every second she was on screen and just a terrible character. The stakes felt very low this time around. Characters are killed and brought back in ridiculously cheesy and unoriginal ways. There is a celebration at the end of the movie which is awkward considering that hundreds of people literally just died and a good portion of the city was decimated in battle, yet no one is mourning any of their dead friends and family members but instead are ready for a party. The only positive aspects this blunder has to offer is the acting from our female co-leads, an exciting final battle and great production and costume design. Angelina Jolie hasn’t done a ton of acting over the past few years so to start her comeback with this movie is rather sad. She has some much better looking films on the horizon but let’s hope there is some magic spell to make us forget that this Disney cash grab exists.