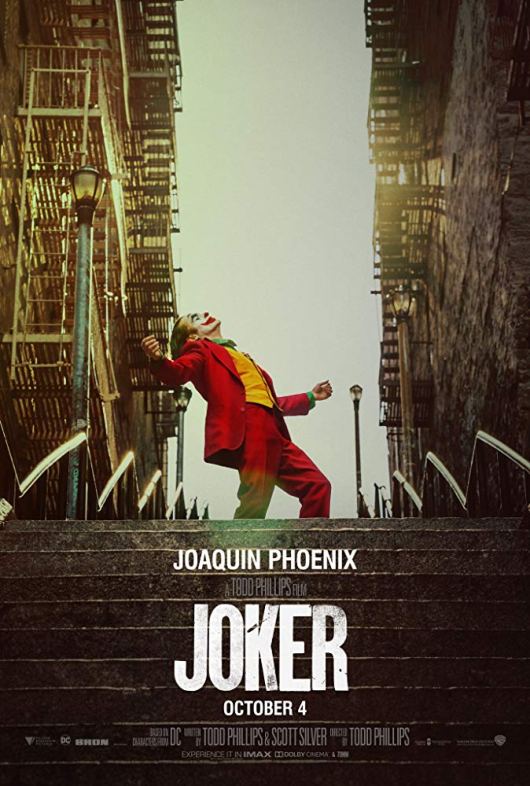 7.5/10 Maybe the single most controversial film of the year (although after now having watched it, the controversy is all pretty manufactured and unwarranted), “Joker” is a fresh, new take on Batman’s most recognizable villain. Overall, the film succeeds and sets itself apart from other superhero/supervillain films by not even acting as one but instead being a character study and a drama. Every Batman film to have the Joker featured has still always been Batman/Bruce Wayne’s story. For the first time this is completely Arthur Fleck/the Joker’s story and Bruce Wayne barely plays into the story. It is really interesting to not only have the Joker be front and center, but to also get a proper origin story that portrays a very accurate representation of someone’s mental health decay, how childhood trauma can haunt you for life and the breakdown of society impacts individuals. Subverting expectations by having the Joker be sympathetic while portraying the Wayne family as cold and villainous rich people was an original take on a story every comic book fan knows. Joaquin Phoenix gives perhaps his best performance in his entire career and is guaranteed to be nominated for Best Actor at the Oscars, while currently being the well-deserved front runner. His dedication from losing 50 pounds to his research on pseudobulbar affect, AKA “PBA”, with it’s neurological condition characterized by uncontrollable laughing and/or crying outbursts to his downward spiral completely elevates this film. When asked who has given the best Joker performance, I really think it is a tie between Heath Ledger and Joaquin Phoenix but for different reasons. Although both give flawless acting performances, Ledger’s Joker is the mysterious, anarchy driven, theatrical version of the character while Phoenix’s Joker is the realistic, average loser incel, neglected sociopath that has fallen through the cracks. Despite playing the same role, their characters are completely different. I loved that this wasn’t a retread of a Joker we have already seen before in the past. The production values were top notch from the stirring cinematography, the haunting score (one of the year’s best), the incredible recreation of 1981 with flawless production and costume design, etc. From a technical standpoint, this film is a sight (and sound) to behold. I loved how the film’s sudden bursts of violence came unexpectedly and always jarred you from what had previously been happening. Despite how great many aspects of the film were, it was not without its problems. The biggest issue I had is just how much is taken from early Martin Scorsese films. It is one thing to be influenced by a film, as all film makers are, or to pay homage, but this film straight up takes directly from “Taxi Driver” and “The King of Comedy” to the point where you can’t ignore it. If you haven’t seen those movies, you won’t mind but as a cinephile who has, it did hurt a bit of the film’s originality. The biggest plot problem was a plot twist with Zazie Beetz’s character as Arthur’s “girlfriend”. The problem was that the twist was able to be seen coming from a mile away and to make matters worse, once the twist is revealed, a flashback is shown to insult the audiences’ intelligence, as if we didn’t already understand what was going on. Some of the political upheaval in the film was a bit underdeveloped, convenient and muddled. Finally, Gotham City lacked personality and instead of feeling like its own unique version of the city, it completely felt like New York City, instead of its own standalone place. These complaints keep the film from reaching true greatness but the Oscar worthy acting and score, phenomenal mise en scène, original Joker centered take, realistic real world portrayals of psychological and societal descent and solid soundtrack make this a memorable film worth seeing and revisiting a few times…no joke.