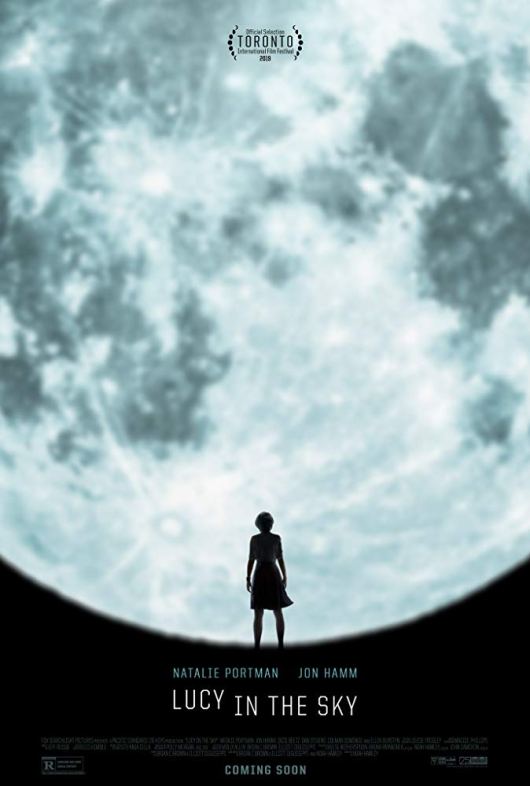 6/10 It is always slightly jarring watching a film after having seen a misleading trailer for what you are about to see. The trailer and marketing for “Lucy in the Sky” (which originally had the much better title, “Pale Blue Dot”) makes this look like a fictional story of an astronaut who comes back from space and in comparison to the vastness and beauty of looking out at the universe, nothing makes sense anymore and she ends up having an affair with a co-worker. That is only the first half of the story. In reality, this is largely inspired by the true story of Lisa Nowak, the first astronaut to ever get arrested. You may remember from the news in February of 2007, when she drove 14 hours across the country to Orlando, even wearing diapers so she wouldn’t have to make stops to use the bathroom, to confront her former lover’s new girlfriend. This film doesn’t follow her story exactly, but close enough that once you realize what this film is about, your view of the film changes. One problem is that this has some tonal issues. If it would have been a straight forward retelling of Nowak’s story, that would have been fine. Or if it would have been a fictional story about coming back from outer space and nothing making sense anymore while having to cope with a completely warped view of reality and life, that would have been really interesting. But this film bites off a little more than it can chew by going for both. The beginning of the film is really rushed so Lucy falling in love with her co-worker so suddenly is rather unbelievable as portrayed in the film. We don’t get to know Lucy and her husband as a couple before she has moved on from him after six years of marriage. Another problem is that in the beginning of the film we are supposed to believe that Lucy has been so changed by the beautiful magnificence of space and how awe inspiring it is, yet we don’t get many beautiful, awe inspiring shots of outer space so we can see what she sees and experience the wonder that she does. All that being said, this film definitely excels in several ways. First of all, the acting all around is fantastic. Natalie Portman is the star here and her descent into madness and losing her mind is handled so well. She is such a powerful actress and this film reminds us of that. The rest of the supporting cast does a solid job too but Portman is the stand out. For this being the directorial debut of Noah Hawley, who has worked as a showrunner in television up until this film, he shows great promise as a director with some of the amazing stylistic decisions he makes. One scene in particular which has a cover of “Lucy in the Sky with Diamonds” playing over it is extremely well done and gorgeous. Hawley’s use of editing and changing the format of the screen was fascinating to watch. The score and soundtrack also compliment the film perfectly and there is a strong emotional pull at play here. A scene with Lucy doing a NASA exercise underwater was extremely well done and even though we know how it will end due to the real life story, Hawley still builds up some genuine tension to keep us on the edge of our seats. Overall, this film is worth seeing, although there is no need to rush out to see it in theaters. Like a distressed astronaut coming back from space, this film has problems worth noting but should still be shown some love.