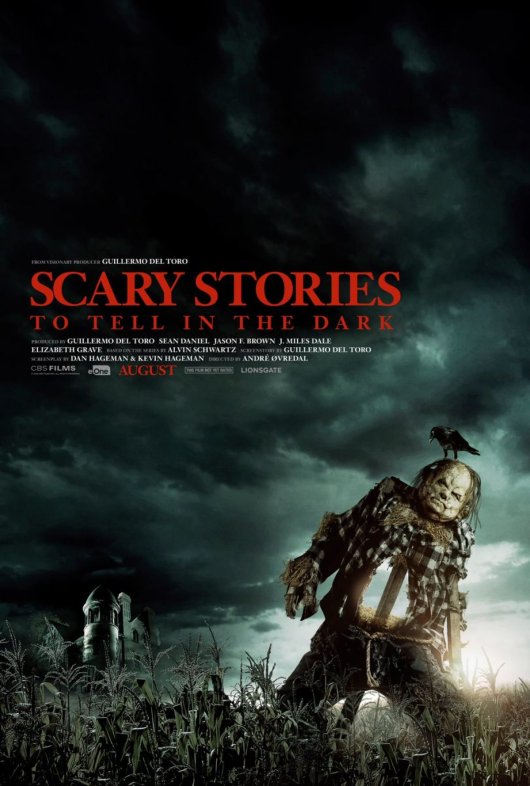 7/10 Based off of a book series comprised of…scary stories, this film mostly achieves what it sets out to do and is a surprisingly fun time at the theater. Before I get into what worked with this film, let’s start with what didn’t. Despite having the word “scary” in its title, this film isn’t very scary. It can be creepy and has a great horror vibe/tone but never quite achieves a level of scariness that I would have wanted it to. Another problem is that there is a really fascinating backstory to the Bellows family and in particular Sarah, whom writes the deadly entries in this book. However, the backstory is only teased and shown in such brief flashbacks that we have many unanswered questions and don’t know a lot of interesting facts about what went down in the past. The backstory could have been an entire exciting film all on its own but instead we only get a couple pieces of that puzzle and there was really no need to hold back. Instead of getting the answers we desire, we get a ton of Richard Nixon and Vietnam imagery and content and although it sets the era in which the film takes place, it is done heavy handedly so we expect Nixon, Vietnam or the issues surrounding them to matter to the film more and they really don’t. It would be like showing a movie character load a gun, cock it and then never see them use the gun again. It just doesn’t make much sense. Finally, a couple of the minor bully characters are pretty generic bully types with no real motivations except to be mean. It would have been nice to develop them a little more so we at least knew why they were such jerks. Despite those negatives, there is a lot to admire here that overall makes this a pleasant summer surprise. As I mentioned before, the creepy vibe and tone are in full effect throughout the entire film. Guillermo del Toro is the co-writer and producer and one thing he is great at is providing creepy creatures in his films. The disturbing monsters from this film are a perfect blend of live action practical effects/makeup and minimal CGI, which really make them look as disgusting and disturbing as they are meant to look. The cast is having a ton of fun and there was more humor than I was expecting. Luckily, the humor worked and made the back and forth banter between these teenagers feel like they all had authentic relationships and were struggling with real problems. Their friendships and romances felt natural and not at all forced. I enjoyed how the characters had separate stories and the suspense we as the audience feel not knowing if their fates are sealed or if there is some chance at survival. The ending left room for another film, which I hope they pursue as long as they can keep the characters feeling authentic and humorous, provide a chilling atmosphere, interesting creatures and fears and tie it all together in the end. Hopefully they expand on the backstory that they teased, flesh out some minor characters and make the experience a little scarier and we might have the next great horror franchise on our hands. Wouldn’t that be a story to tell?