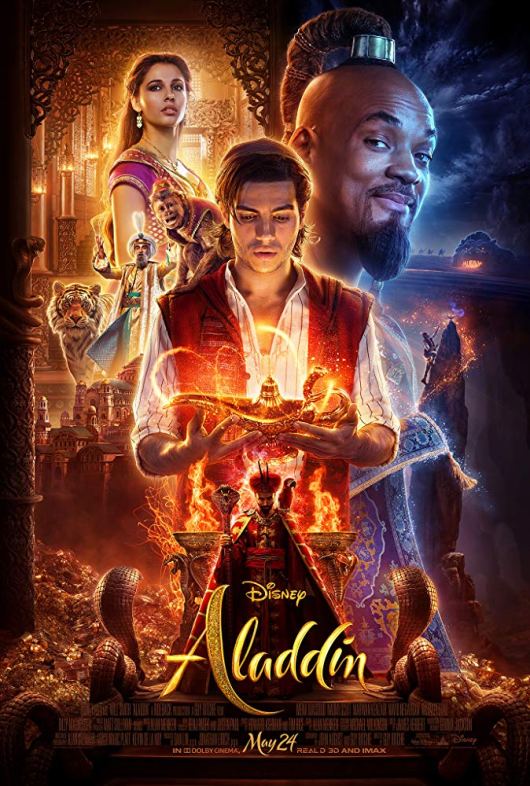 6/10 My 9th most anticipated film of 2019, “Aladdin” is the latest live action Disney remake, coming out just two months before “The Lion King”. I watched the entire original animated trilogy to prepare for this since I hadn’t seen the second and third installments since childhood. Sadly, this movie fails to live up to my favorite animated Disney film as a kid, the original “Aladdin”. This movie does have some accomplishments going for it. First and foremost, this is a pretty fun movie to watch that people of any age can enjoy. These songs are classics and the new score from Alan Menken is beautiful. They also heavily improved upon the character of Jasmine. In the original she was essentially just the love interest whom wanted some freedom from the palace that she was confined to. In this movie though, they develop her character a lot more, give her a new song and her character growth benefits the movie. The other character that basically gets an upgrade is her father, the Sultan. He was essentially just a naïve, lovable fat guy in the original film and here he too gets some more development and is a stronger character in this movie. There are some great visuals of the city and the people that inhabit it and there is a lot of energy behind the musical numbers. That being said, there are many reasons that this movie doesn’t live up to the original and its potential of what this could have been. First off, there is only one Robin Williams. Will Smith does his best with what he is given but he just isn’t the Genie to me. When he sings the song “Never Had a Friend Like Me”, it isn’t nearly as good as the original and is probably the weakest of all the cover songs that this movie does. Even worse, during the ending credits after a dance number ends you hear, “DJ Khaled!” and an awful remix of “Never Had a Friend Like Me” starts playing, signaling that we should leave the theater immediately so you don’t have to hear how garbage that song can become. The actor who plays Aladdin also doesn’t have as good of a singing voice as the original Aladdin, so that was slightly disappointing. Perhaps the biggest complaint for me was Jafar. I wasn’t big into the performance of the actor playing him and he didn’t feel as threatening or menacing as he did in the original film. In the original, the final fight against Jafar was great as Jasmine was trapped in a giant hour glass with time running out and Jafar turns into a massive, red, evil genie. Putting Aladdin in that situation was lots of fun and a great way to end that film. This time around, a couple characters get frozen in essentially a magic bubble, Jafar doesn’t turn into a snake or anything visually frightening or cool like in the original and the end fight is over very quickly. It was a super anticlimactic way to end the movie and a pretty big letdown because you could have had some really cool visuals there. There was also one huge coincidence that made me roll my eyes. After Jafar has broken out of prison and is out in Agrabah, Aladdin leaves the palace and in a huge city of thousands of people, Jafar and Aladdin cross paths almost instantly. It felt really rushed and lazy with how big of a coincidence it was. Some of the humor doesn’t work (I’ve never heard the word “jam” this much in a movie in my entire life) but luckily they don’t try to put too much humor in there. The new song Jasmine sings is pretty forgettable too. The songs not living up to the original, some downgrading on the cast, coincidences and an anticlimactic ending really distracts from the lush visuals, fun energy, great production design, smart character expansion and wonderful score. Here’s hoping that “The Lion King” can redeem what could have been here.