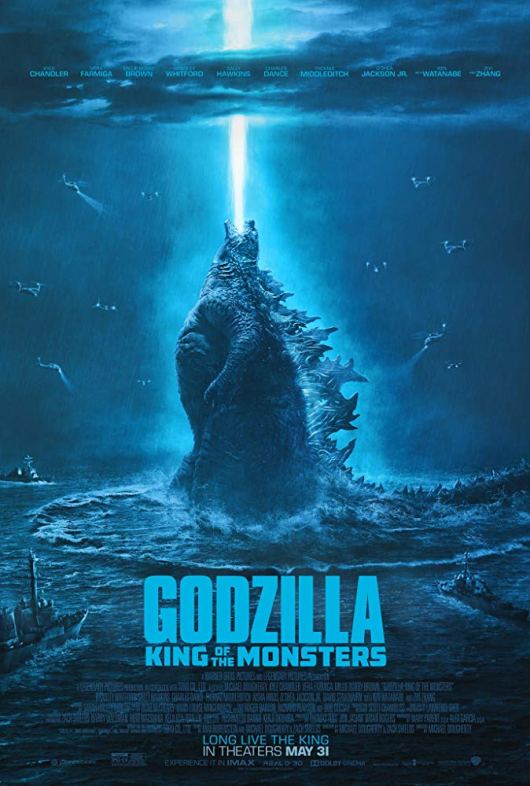 5/10 Upon re-watching 2014’s “Godzilla”, it held up a little better than I remember it initially being. Five years later, this sequel arrives in all of its mediocrity. This is a movie all about expectations. If you just want to turn off your brain and see giant, cool looking monsters beating the crap out of each other, then you will enjoy this movie. However, if you like some intelligence, character development and a strong plot with your action, you will be sorely disappointed. This is almost like a Michael Bay movie. Beautiful to look at with great action but really loud and dumb. There are many problems to be had with this script. Millie Bobby Brown’s character is able to use a super complicated device called the “Orca” even though it seems her parents are the only two people on the planet whom know how to properly use it and she has never used it before or had her parents show her anything about it. Ziyi Zhang’s character has no real personality and is only there to give ancient Eastern exposition about monster lore. O’Shea Jackson Jr.’s character is in the military but is allowed to have a full on beard for some reason (and he is NOT special forces, in which case exceptions are made). Characters always have a clear path to drive down on streets, despite cities being completely demolished and destroyed and there would realistically not be a clear path down every street. The biggest eye rolling moments happened three or four times. Every time main characters we love were about to die from a monster, Godzilla shows up at the last second to tackle said monster just in the nick of time to save the humans. This “Godzilla ex machina” happening so many times became predictable, repetitive and made me feel that the humans were never really in much danger. Some lines in the script that tried to be funny fell flat, but luckily there were only a couple of those. There is also an environmental theme that, while relevant, has also become overused in movies today and was really heavy handed. As for the positives, this movie does get a few things right. First and foremost, the action really is well done as the fights are fun to watch, the special effects look incredible and the cinematography lets us watch the action unfold. Even outside of some of the fight scenes, there are a few really beautiful, well composed shots in this movie. Surprisingly, this is probably the best score I have heard so far in 2019, which I was not expecting. Playing the “Go Go Godzilla” song during the end credits was also super fun and I was happy to hear that. There are a couple of twists and turns with the plot which I enjoyed since I wasn’t always sure what was going on and I loved that this movie had the guts to kill off certain characters, instead of playing it safe and unrealistically letting everyone live. The deaths upped the stakes and brought some emotional weight. The acting performances were all well done and I am glad that several of these characters are coming back for next year’s follow up, “Godzilla vs. Kong”. There may be many nonsensical elements in this movie and script problems, but the high production values and fun monster fight scenes make this a movie to stream/rent as long as you keep your expectations in check.