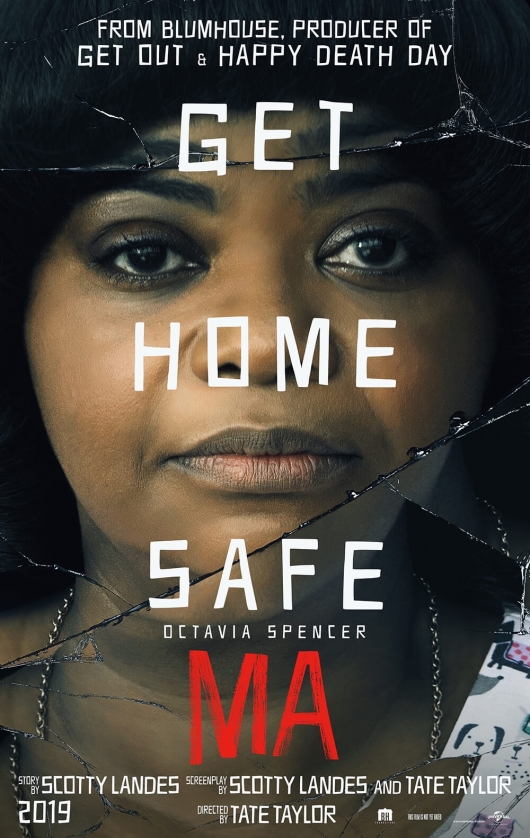 6.5/10 Blumhouse is known for making low budget horror films with mostly unknown or little known directors, writers and actors. So it was a bit of a shock that they were teaming with well-established director Tate Taylor (“The Help”) and his Oscar winning actress from that film, Octavia Spencer, as well as several other recognizable actors for this film. Although all this talent behind and in front of the camera generally are better than the material they are working with here, this is still a really fun, crazy film. The script definitely has some problems and some horror clichés certainly take place. Characters make extremely dumb decisions. Oscar winner Allison Janney (“I, Tonya”) is completely wasted here. My biggest problem is probably centered on Octavia Spencer’s character herself, despite her amazing performance where you can tell she is having a blast playing this psycho character. The problem with the character is twofold. First off, it is slowly revealed via flashbacks that this character went through a traumatic event when she was younger. As traumatic as that was, I didn’t buy that what she went though would completely turn her into a crazy person later in life. If they would have established that she was abused by her parents or had mental health issues on top of said traumatic event, it would have made her mental descent more believable but they don’t take the time to do that and just based her craziness off of the one incident as a teenager, so I wasn’t buying how massively that impacted her. Second, with how insanely crazy she is and has been, I refused to believe she would have kept it together for so many years as a functioning, employed adult. For her to break down this much only now, I didn’t necessarily buy that. She is also able to get away with a lot of criminal acts to where I feel she would have been caught by the authorities fairly easily. Those complaints aside, I couldn’t help but really enjoy watching this movie just with how fun it was and especially how it escalates towards the end. I almost wished they would have pushed it a little further (and they could have since they have the R rating) but the ending does get pretty insane, which I liked. This movie has a super fun soundtrack and a solid score, along with pacing that kept me amused the entire time. The actors are having fun and there were a couple of funny moments, particularly involving one religious girl who shows up to the parties. In the end, “Ma” is definitely a flawed film that could have benefited from another rewrite or two, but a great leading performance from Octavia Spencer combined with a pretty crazy final act makes this film just a lot of fun to watch. It may not be a must see but if you like thrillers about psychopaths, then take a trip to Ma’s house.