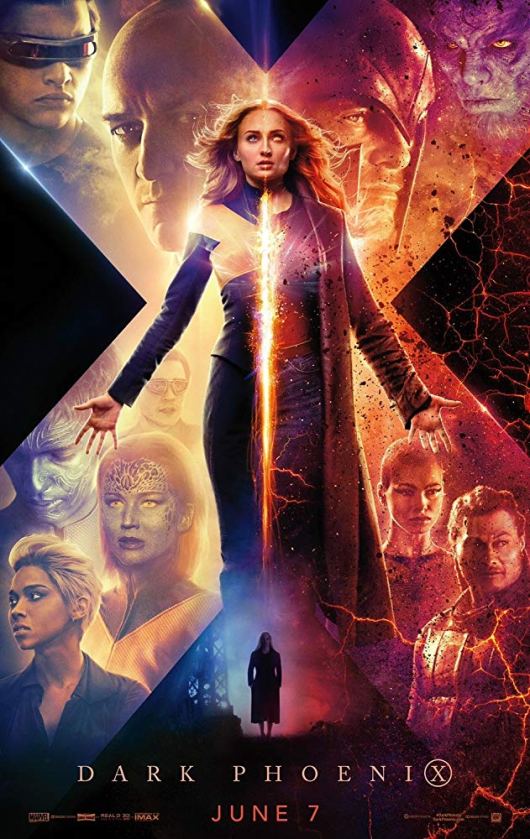 6.5/10 “Dark Phoenix”, the lowest grossing and lowest scored X-Men film on Rotten Tomatoes may have some problems both big and small but I am genuinely surprised at how much flak it has received from critics and its low box office returns. I do definitely see where some problems lie. Two problems are more of a franchise problem so they aren’t just specific to this film alone. I complained in my “X-Men: Apocalypse” review about how that film took place in the 1980s yet all of these cast members from “X-Men: First Class” are supposed to be 20+ years older now, yet they look the same. That trend continues as we unnecessarily jump into the 1990s so now these characters are 30+ years older than when we saw them in “X-Men: First Class”, yet they don’t even try to make them look like they’ve aged at all. Another franchise problem is how confusing the timeline has become. A character dies in this movie (something the terribly marketed trailers gave away which blows my mind why you’d spoil a character death in your trailer) yet is alive in future films but because of “X-Men: Days of Future Past” everything has changed apparently and it is just hard to keep track of what happened, what was erased, what is still in play, etc. As for the film specifically, Jessica Chastain’s talent is wasted as a completely forgettable villain, following in the footsteps of her “A Violent Year” co-star, Oscar Isaac from the last film. The fun character Quicksilver is barely in the movie which was disappointing to see. The normally phenomenal Hanz “I don’t score superhero films anymore” Zimmer provides a rare forgettable and overall disappointing score. I honestly didn’t even know he scored it until after the film ended and then I was shocked to learn that he phoned this one in. The fact that this is the last X-Men film with this main cast after four films and eight years together, you’d think the film would have gone “Avengers: Endgame” and been more epic and killed off more characters. Instead, almost everyone lives and the scale is smaller than I would have hoped for. All that being said, there are many solid aspects to this film that I think are being downplayed or ignored while people only focus on the aforementioned negative aspects. These actors continue to be…first class and bring their A game to these roles and it is sad to see them go. Sophie Turner does a great job in the title role and goes through a wide range of emotion with a lot of skill and talent. Everyone puts in great work, even if their role is wasted or not the most well written. The emotional stakes are also well done. The team turning on each other, a character’s death, Jean Grey’s transformation into the Dark Phoenix, etc. provides a bevy of emotionally powerful moments that I really enjoyed. The action isn’t super plentiful but what is there I really enjoyed. I know the climax/third act of the film was reshot and the end battle moved from in space to a train and I really dug that train battle. The fight was well choreographed and had some badass moments. The special effects look great and the pacing was perfect so we were always entertained and moving along. In the end, a more epic finale may have been more powerful and there are definitely problems to find but the positives outweigh the negatives for me so if you are an X-Men film fan, this is a must see. If you aren’t by now, this won’t be the film that makes you suddenly jump to this franchise but after 19 years of these films and ups and downs, I can say that overall these films have made me a big fan of this franchise and these characters.