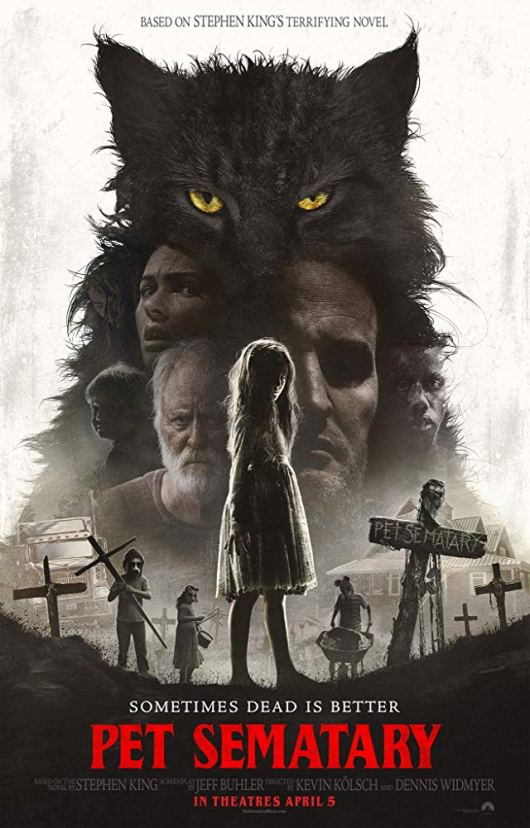 5/10 No matter what can be said about this movie, this is without a doubt a huge improvement over the original 1989 disgrace of a movie and its somehow even worse sequel that no one should have the misfortune of watching. The movie ends up being mediocre in the end but if you want to watch any “Pet Sematary” movie, this should be the one you seek out. One of the biggest problems with this movie is the source material on which it is based. Stephen King has written some great books that have been turned into great films (2017’s “It” was great and I am stoked for part two this September) but this is not one of his best works. There are just some overall really dumb story elements and in typical horror movie fashion, characters make extremely dumb decisions. The minor changes made between this movie and the original are all fantastic improvements yet the major plot elements are unchanged so if you have seen the original it often feels like you are watching the same movie or something you’ve already seen before, which robs you of suspense. There are some lazy jumps scares (a jump scare from a semi-truck has to be one of the worst jump scare ideas of all time since it isn’t like a semi-truck can sneak up on you; you hear them coming and they get gradually louder as they get closer) and a generic score. Most of the elements of this movie are just passable. We have average acting performances, average suspense, average overall experience. The pacing is pretty decent however and an element with the wife’s deceased sister was a lot better in this version of the story so I applaud it for that. There is some really clunky exposition with the wife explaining the background of the sister’s story to her husband, which he would have realistically known about for years prior. Changing which child dies from the original was also a very wise move as well. Despite some of the worst movies of all time being in the horror genre, horror has had somewhat of a resurgence with at least one fantastic horror film each year since at least 2015 (2015’s “It Follows”, 2016’s “The VVitch”, 2017’s “It” and last year’s “Hereditary”) so my horror expectations have been raised. This movie being so mediocre, forgettable and worst of all, not scary, that it almost feels like a waste of time once the end credits start rolling, despite being stronger than the original movie. Being a better movie than the original is a solid improvement but when the end result still ends up making you shrug your shoulders and say, “Meh”, then maybe this is a property that matches the movie’s tag line, “Sometimes Dead Is Better…”