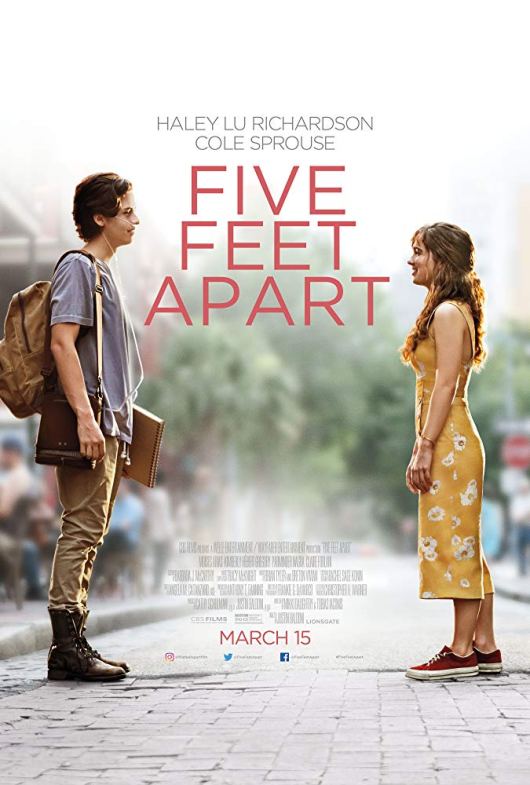 6.5/10 Teenage romance movies are a dime a dozen but “Five Feet Apart” comes in with a (slightly) new take by having our two romantic leads have Cystic Fibrosis. Not only do our two leads have chemistry together but the entire cast does a solid job with what is a very emotional movie. The emotions behind this movie are the strongest elements it has to offer. I really liked that the movie was not only willing to go to darker, sadder places but the ending felt pretty perfect following everything leading up to it. I wondered how the movie would end knowing that these lovers weren’t even able to kiss or touch and the ending was tragically romantic and fulfilling. Another stand out of this movie was the soundtrack. It had some “Garden State”/”Scrubs” vibes going so I kept waiting for Zach Braff to pop up as a doctor but the soundtrack and score really complimented the feel of the movie and this younger couple. The movie is not without its flaws however. The story does borrow elements from similar movies like “A Walk to Remember” and “The Fault in our Stars” and has some cliché romantic elements. Also, as someone whom doesn’t know a lot about Cystic Fibrosis, there was a missed opportunity to teach the audience more about it. I loved that it brought awareness to Cystic Fibrosis but there was the perfect opportunity for exposition in the form of our female lead whom has a blog/YouTube channel where she talks about living with Cystic Fibrosis and her everyday life. We see glimpses of these videos but it would have been nice to have maybe seen a full one or more footage with her explaining more about Cystic Fibrosis so we as the audience could learn more about it. I also wish some of the supporting characters would have gotten a little bit more development and the female protagonist isn’t very likeable at certain times but at least her and her male counterpart’s personalities are developed. The two of them falling in love happened a little too quickly for my tastes but before and after being in love is well done. The movie isn’t perfect and has its clichés and things that could have done better but two well-acted lead performances, a memorable soundtrack and really strong emotional elements make this a movie worth calling in sick to stay home and watch.