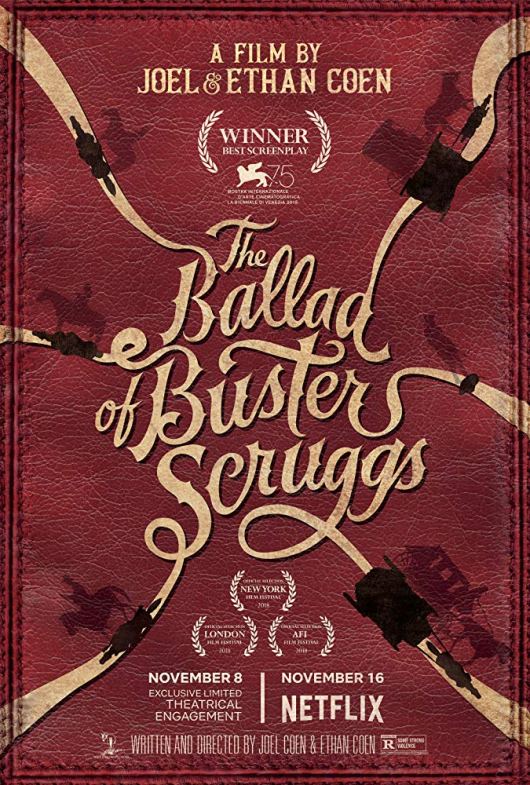 8/10 Originally conceived as a limited series TV show, the Coen Brothers decided to rework this to make it a film which Netflix ended up picking up. Broken up into six stories (each story will get its own hashtag since I always do six anyways), some are better than others but overall this is a very well made film and it is great to see the Coens back into western territory, where they really excel. Before I get into the individual stories, I will say that overall the production design, costume design and acting are great. The original score also is very underrated and should have been nominated by the Academy and the songs from the first story are great although “Little Joe the Wrangler (Surly Joe)” is right up there with “When a Cowboy Trades His Spurs for Wings” for its best song. My biggest overall complaint is the order of these stories. The action, fun and excitement is really front loaded in the first half so the second half of the film feels a lot slower. Changing the order of these stories and spreading out the action would have greatly benefited the film. As for the individual stories, the opener, “The Ballad of Buster Scruggs” couldn’t be more fun as it is an over the top, silly, musically fantastic thrill ride. “Near Algodones” is also a lot of fun as it combines that classic Coen dark humor with some solid action. “Meal Ticket” is one of the two heartbreaking stories and the stand out acting from Harry Melling is equal parts fantastic and tragic. Although it feels slow in comparison to the first two stories, the Greek tragedy thrown in is as sad as some of Melling’s soliloquies. “All Gold Canyon” is really a one man show but I absolutely loved it. It is a slow burn that makes the ending action really stand out after such beautiful scenery and a terrific Tom Waits performance that sustains your attention with nothing more than a man and some digging. “The Gal Who Got Rattled” is the second tragic story after “Meal Ticket” and I really loved the character development and climactic battle in this one. Despite its tragedy, Zoe Kazan and Bill Heck are amazing and formidable lead characters. This one will get you right in the feels. Finally, “The Mortal Remains”, despite being very well acted and having well written dialogue, felt like a very anti-climactic ending that was a bit of a letdown for me. It is the weakest of the bunch but doesn’t bring down the overall quality of the entire film. Definitely worth a look, especially if you are a fan of the western genre or the Coen brothers’ body of work.