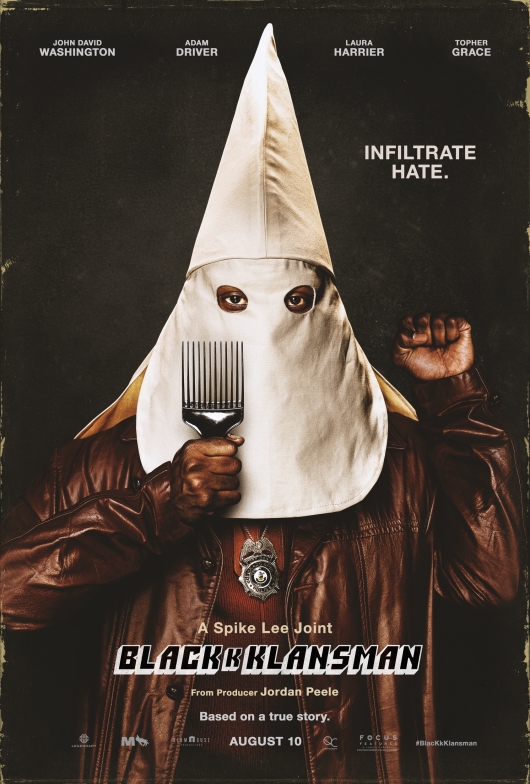 7/10 Spike Lee movies tend to be very hit or miss and lately, have been more on the miss side of the spectrum. That is why it is nice to see him put out his first good movie since 2006’s “Inside Man” (although I have not seen his “Oldboy” remake to judge that). Where this film excels is first off, that the story is a very interesting and true one. The plot keeps you guessing and engaged the entire time as it is paired with its solid pacing. The cast is also first rate and Denzel Washington’s son, John David Washington, seems so confident as a leading man, despite this being his first major leading role in a film. Adam Driver and the rest of the supporting cast also do a great job of fitting into their roles. The soundtrack and score compliment the film expertly and the film is very well made from a technical stand point. It did raise some questions however like, why not have Adam Driver’s character just speak on the phone to David Duke and the KKK, since he is the one meeting with them in person so there would be no discrepancies with his voice? I am guessing the film does this because that is what the police did in real life but it still begs the question WHY and offers no explanation. Having Washington’s character also be David Duke’s bodyguard in a scene is brought up as being a terrible idea (rightfully so) but the police decide to go through with it regardless, which was extremely stupid. Other issues include Alec Baldwin’s distracting cameo (he probably just said he wanted to be in an anti-Trump film somehow and Lee shoehorned him in awkwardly) and the film’s ending. The film is at its strongest when it tells this story from the 1970s and we get to know these interesting, colorful characters. Where it is at its weakest is when it tries to force lazy parallels to today’s climate using cherry picked footage from the last couple of years. It really takes you out of the film, is lazy and like the ending of Adam McKay’s “Vice”, really hurts the overall quality of the film. Luckily the rest of the film is strong enough that the ending doesn’t sink the entire film but Lee ending it how he does (and beginning it with Baldwin’s cameo) places personal agendas over factuality. Forcing Trump’s campaign slogans (“Make America Great Again” and “America First”) but being said by David Duke not only never happened, but is so heavy handed and lazy that the bias becomes problematic. Since the rest of the film is very interesting and well told, this still warrants being seen, as it is a good movie, but here it to hoping that Lee can stretch his limits as a director and make a movie that keeps this high level of quality without forcing his own political biases into it.