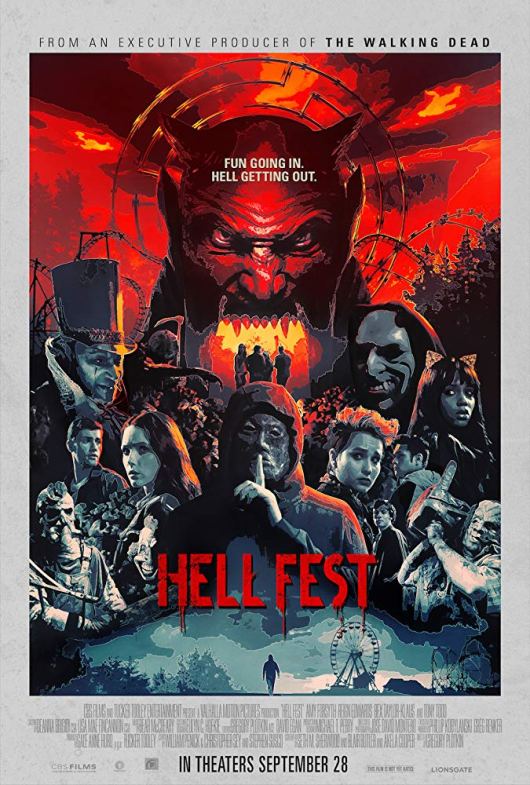 1.5/10 Just when I thought “Crazy Rich Asians” was destined to simultaneously be the worst movie of 2018, “Hell Fest” had to swoop in and put up a fight. My expectations were already low for this movie due to it being a cliché teen horror movie with no major talents in front or behind the camera making it. Yet my expectations were still let down by how truly awful this piece of garbage was. Right off the bat, the dialogue between the characters was cringe worthy. The lazy, cliché script not only produces lifeless, unlikable characters but also no scares and it actually kills off the single likeable character super early into the movie. None of the characters are developed as the film makers are only interested in killing off characters, instead of having the audience get to know them and sympathize with them. So when characters do get killed, not only do we not care but we root for it to happen. There is also a “twist” at the end that was extremely unnecessary, unneeded and just plain dumb. It didn’t change the movie at all or shock me or make me think. It just made me happy the movie was over. Situations are extremely unrealistic and go too far. There is a scene where someone is trapped in a haunted house maze building with only one exit out. The cops rush in but the character is gone. They never explained how that character disappeared or got out because it would have been impossible to. It just doesn’t make any sense so they don’t even try to explain it, which is insulting and lazy. Elements like the score and cinematography are as generic and forgettable as they come. Nothing stands out with this movie, setting it apart from any other clichéd horror movie with dumb teenagers as the leads. I watched this movie thinking that at worst I could watch a horror movie close to Halloween that kills an hour and a half. I had no idea how miserable and joyless of an experience I would have watching this movie. Tony Todd from “Final Destination” and “Candyman” fame was advertised as being in the movie as a selling point and he shows up for a disappointing five minutes total, if that. Why they wasted his time by having him show up that briefly at all is beyond me. The villain of the movie is an unoriginal knock off of Michael Myers or Jason Voorhees, with nothing new to add. The only positive I can say is that the movie earns its R rating. The violence is gory and gruesome, which I enjoy in horror films. They don’t tone it down or quick chop edit it so you can barely see what is happening like in a “Saw” film. Since I didn’t care about all but one of the characters, watching most of them die at least gave me momentary enjoyment. That being said, shoving a pumpkin up your butt would be a more enjoyable Halloween time festivity than watching this atrociously lazy excuse for a movie. Hard pass!