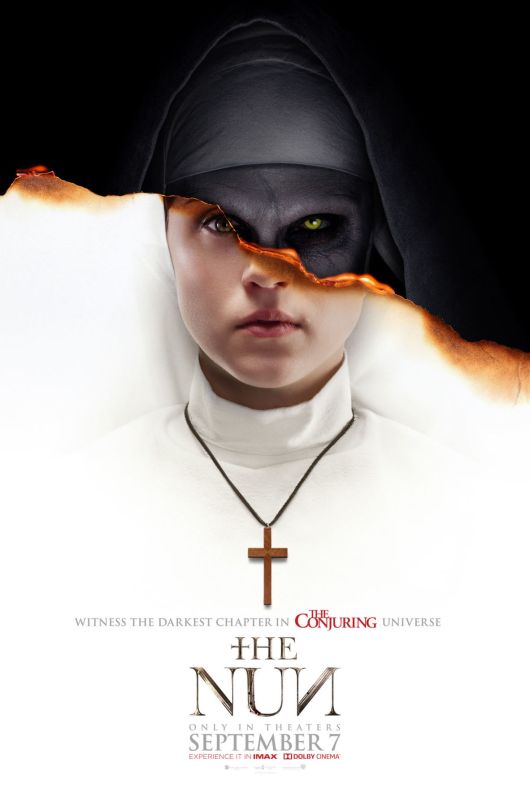 5/10 In a world of successful (the Marvel Cinematic Universe AKA MCU) and unsuccessful (Universal’s Dark Universe) connected film universes, I guess it is only fitting that we have a horror related one. From “The Conjuring” films came both the “Annabelle” spinoffs and now its next spinoff, “The Nun”. Both Conjuring films are pretty good and the first Annabelle was ok while the second one was bad. With this latest installment, we have a little bit of good and bad mixed together for horror fans. This movie is very passable, but nothing more. The biggest negative is that the movie isn’t scary. Filled with mainly jump scares and a few unsettling images, nothing really stands out as truly being scary or sticking with you once you go home and try to sleep. Take a film like this year’s “Hereditary” that instead of jump scares relied upon its completely unsettling tone and dreadful mood to make the audience feel uneasy the whole time. This is true horror and “The Nun” the standard scary movie that we generally see today. It is rather lazy and not very memorable. There is also a French character who was pretty two dimensional and I didn’t really buy when he comes back into the picture near the end. Despite the lack of scares and horror movie clichés, this movie is not without its positives. The locations and production design used do help set the tone and establishes the darker tone. The creature effects of the nun herself and the demons in the film look really good and creepy. Parts of the score have this male choir that is extremely effective for a modern horror score. I also loved that they cast Taissa Farmiga, whom is the younger sister of Vera Farmiga, from both Conjuring films. Having her play a role and the underrated Demian Bichir as her co-lead provides a solid cast overall. I enjoyed how they tied this movie into the Conjuring Cinematic Universe which takes place at the end of the movie. This isn’t anything new, original or scary but the likeable leads, moody setting, solid pacing and entertainment make this a step up from the last Annabelle movie and if there is a sequel or continuation to this, hopefully they can keep the cast and up the scare factor. Not a must see in theaters but definitely worth checking out on video if you are into the Conjuring films.