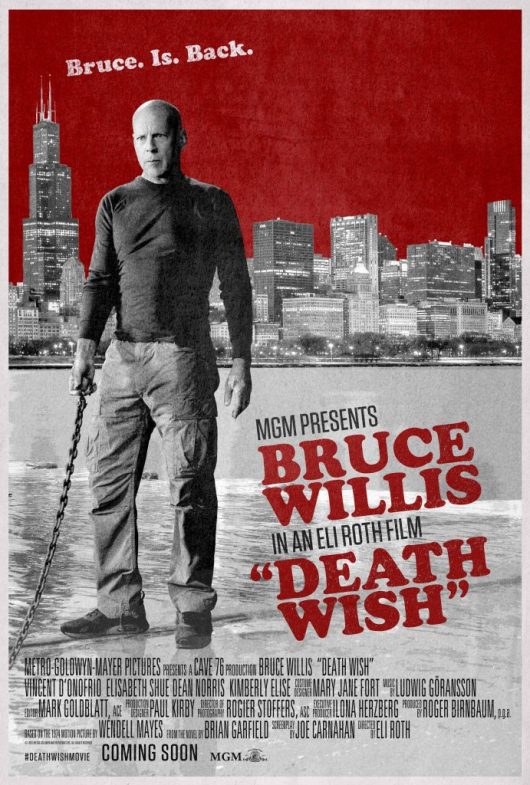 5.5/10 I haven’t seen the original “Death Wish” or its multiple unnecessary sequels in many years but I can safely say that this wasn’t a film that needed to be remade. The original was a classic and classics don’t ever need to be remade. That being said, if you are going to force a remake upon us, I am glad they didn’t go about doing it in an over serious way that tries to be something it is not. This movie is a really fun, dumb movie that doesn’t take itself too seriously and even though the quality may lack, we tend to forgive it for how entertaining it is. The negative aspects include many eye rolling and unrealistic moments (the biggest one involving a bowling ball and some super convenient timing), some moments where the acting leaves a bit to be desired (more on that later), some cheesy one liners and some missed opportunities when it came to emotional moments in the film. In regards to the acting, most of it is run of the mill and average with no one really standing out except for maybe the daughter, since I have never seen her before and she held her own. Bruce Willis starts off a little weak in the film acting wise but then gradually gets better and has more fun with it as he sinks deeper into the role. So there are some decent acting moments, some bad acting moments but overall the acting was just mediocre and nothing more or less. The soundtrack also had a couple fun moments and the action scenes were enjoyable. One does have to wonder how the house of some very rich people who own a lot of valuable stuff not only have no security system whatsoever but also leaves their windows unlocked when they leave their home. Hard to empathize for characters sometimes when they do really dumb things. That being said, the film is really fun, entertaining and doesn’t want you to think too hard about all this. It is forgettable, run of the mill and unneeded but for what we got, we could have gotten an overly serious film trying to make a political statement, which thankfully we didn’t. This is actually more restrained than director Eli Roth is used to doing so here’s to hoping he makes movies more like “Death Wish” and less like some of the torture porn he is known for.