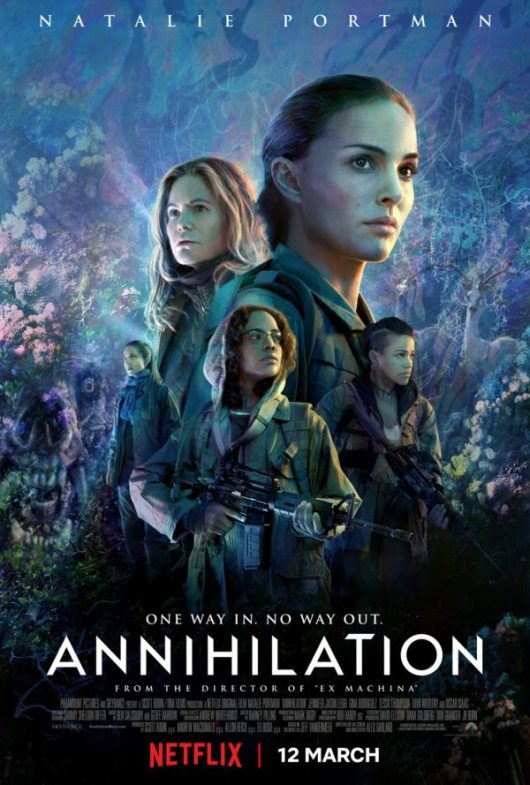 8/10 Alex Garland has been an established screenwriter in Hollywood for years, but it wasn’t until his directorial debut with “Ex Machina” (that made it up to my #2 Best Film of 2015 List) that I really stood up and took notice. Upon hearing about his follow up, this film quickly made my Most Anticipated Films of 2017 List. However, the film got delayed a few months and this year came in at #5 on my Top 10 Most Anticipated Films of 2018 List. “Annihilation” may not be as strong as “Ex Machina” but it is definitely a film worth seeing and it is films like this one that we are the general public need to support more of. This film is ballsy, violent, gruesome, sad, takes chances and is for adults. In a time of constant sequels, prequels, reboots, remakes and films that edit down for a PG-13 and/or play it safe, here we have a bold and daring film that pulls no punches and doesn’t apologize for what it is. Now before people praise how original the film is it should be pointed out that this film borrows quite a bit from the 1979 Russian film, “Stalker”, directed by Andrei Tarkovsky. It is also based on a book (so if anything, you could say the book borrowed from that film). Alex Garland made a lot of changes from the book to the screen but after looking at comparisons of the two I can happily say he made some great changes that really elevated the material. So despite it not being wholly original, it will be for a lot of people. One thing it is for everyone who watches the film is visually stunning. “Ex Machina” was the lowest budget film since the original 1979 “Alien” to win Best Visual Effects at the Oscars. There are a lot of big budget superhero movies that look visually stunning this year, but “Annihilation” is an early front runner in the special effects department. The score is also top notch. It starts of subtle and you don’t notice it much but by the last half hour it adds to the heart pounding tension that this film so effortlessly creates. The film does a great job of creating tension and making the viewer nervous and uncomfortable until the situation is resolved. Part of what else makes that effective is the brilliant cast. The film is well cast and the actors all do a great job with their characters. Natalie Portman continues to show that despite being an Oscar winning actress how underrated she is when people like Jennifer Lawrence make all of the headlines these days. The supporting cast stands out and the themes conveyed in the film are meaningful and impactful. The emotions are strong and I love how they show the guilt that drives Natalie Portman in her mission to save her husband. The twist at the ending and the last half hour were pretty bonkers and that is a good thing. There was nothing predictable about the end of the film. The only negatives I can harp on besides borrowing from other films/books would be when a paramedic character gets uncharacteristically squeamish by a video (if you are a paramedic, I know you have seen far worse) and some unanswered questions. Despite minor negatives, I loved the ending and how beautiful and haunting this film was. These are the films we should support and I highly recommend it.