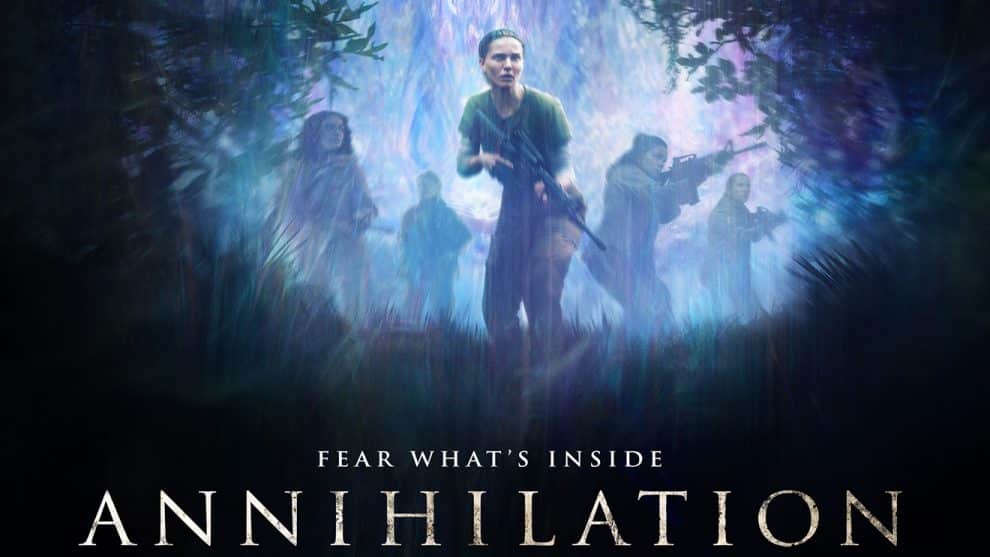 Release Date: February 23rd 2018
Director: Alex Garland (Ex Machina)
Screenwriter: Alex Garland
Starring: Natalie Portman, Oscar Isaac, Jennifer Jason Leigh, Tessa Thompson, Gina Rodriguez, Tuva Novotny
Rating: R for violence, bloody images, language and some sexuality
Trailer Link: https://www.youtube.com/watch?v=89OP78l9oF0
Plot Summary: Lena, a biologist and former soldier, joins a mission to uncover what happened to her husband inside Area X – a sinister and mysterious phenomenon that is expanding across the American coastline. Once inside, the expedition discovers a world of mutated landscape and creatures, as dangerous as it is beautiful, that threatens both their lives and their sanity.

Release Date: October 12th 2018
Director: Damien Chazelle (Whiplash, La La Land)
Screenwriter: Josh Singer
Starring: Ryan Gosling, Corey Stoll, Kyle Chandler, Jon Bernthal, Claire Foy
Rating: PG-13 for some thematic content involving peril, and brief strong language
Trailer Link: https://www.youtube.com/watch?v=PSoRx87OO6k
Plot Summary: Based on the authorized biography “First Man: A Life Of Neil A. Armstrong” by James Hansen. NASA historian James R. Hansen got rare direct access to Armstrong, a test pilot-turned-astronaut who was so driven to reach the moon and play the role of American hero that he became known as “the Ice Commander.” Armstrong had a family tragedy before Apollo that turned him into this driven astronaut, and he became such a perfect hero that while Buzz Aldrin was announced to be the first man on the moon, NASA reversed its decision because Neil was regarded as more heroic. Armstrong returned from the moon as one of the most famous men on Earth but didn’t capitalize on it with a political career or endorsements. He reconnected with his family, shut out the world and became an intensely private man.

Release Date: *DELAYED UNTIL 2019*
Director: Ridley Scott (Alien, Blade Runner, Gladiator, The Martian)
Screenwriters: Shane Salerno, David Scarpa
Starring: N/A
Rating: N/A
Trailer Link: N/A
Plot Summary: “The Cartel,” a gripping, true-to-life, ripped-from-the-headlines epic story of power, corruption, revenge, and justice spanning the past decade of the Mexican-American drug wars. It’s 2004. DEA agent Art Keller has been fighting the war on drugs for thirty years in a blood feud against Adán Barrera, the head of El Federación, the world’s most powerful cartel, and the man who brutally murdered Keller’s partner. Finally putting Barrera away cost Keller dearly—the woman he loves, the beliefs he cherishes, the life he wants to lead. Then Barrera gets out, determined to rebuild the empire that Keller shattered. Unwilling to live in a world with Barrera in it, Keller goes on a ten-year odyssey to take him down. His obsession with justice—or is it revenge?—becomes a ruthless struggle that stretches from the cities, mountains, and deserts of Mexico to Washington’s corridors of power to the streets of Berlin and Barcelona. Keller fights his personal battle against the devastated backdrop of Mexico’s drug war, a conflict of unprecedented scale and viciousness, as cartels vie for power and he comes to the final reckoning with Barrera—and himself—that he always knew must happen.

Release Date: December 14th 2018
Director: Adam McKay (The Big Short)
Screenwriter: Adam McKay
Starring: Christian Bale, Sam Rockwell, Amy Adams, Tyler Perry, Steve Carell, Bill Pullman, Shea Whigham
Rating: R for language and some violent images
Trailer Link: https://www.youtube.com/watch?v=g09a9laLh0k
Plot Summary: Dick Cheney is regarded as one of the most powerful and influential US Vice Presidents in history, having served under (and, as many regard, OVER) George W. Bush from 2001 to 2009. The former Halliburton chairman/CEO — who also served in the Richard Nixon, Gerald Ford and George H.W. Bush administrations — was a hawkish proponent of the War on Terror and the Iraq War, and eventually left office with a 13% approval rating.

5. The Alienist (TNT)
4. The Ballad of Buster Scruggs (Netflix) *NOW A FILM, NO LONGER A TV SHOW*
3. Maniac (Netflix)
2. Too Old To Die Young (Amazon) *DELAYED UNTIL 2019*
1. Yellowstone (Paramount Network)
FINAL NOTES: I want to thank everyone who read this, predicted what my Top 5 would be or who have supported this website and given feedback/talked movies with me. I created this site in large part for you, the readers, to know which films to see and which films to avoid. If you like the site, feel free to share it with friends and pass it on. If I can help at least one person with a movie recommendation and have them really enjoy a great film, it makes all of this work that goes into running the website worth it.
Every year, some movies from my Top 10 get delayed or once in a while, get cancelled and not made at all. As for this year’s list, Ridley Scott’s The Cartel is kind of a maybe right now. It was supposed to start filming this month but no cast has been announced and rumor has it another film may come first. I am hoping he makes it though and will know for sure eventually. The only other film that is definitely getting made (it finished filming a while ago) but may not make the 2018 deadline is Martin Scorsese’s The Irishman. Scorsese spends a long time in the editing room so there is a slight chance the film might come out in 2019 but I am hoping it comes out this year since it is my most anticipated film of the year. Thanks for reading and please feel free to let me know what films you are looking forward to in 2018!