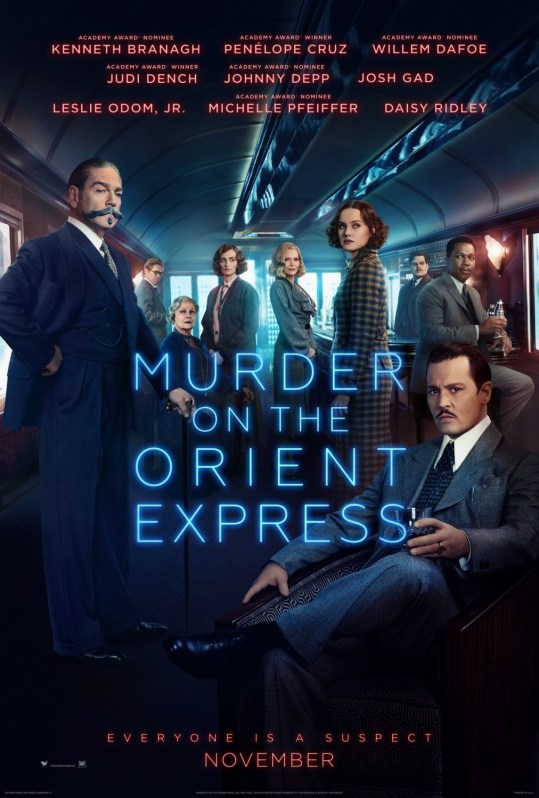 7/10 After watching the previous adaptation of this film from 1974, I wanted to see if this was a necessary remake or just rehashing familiar territory with a more current cast. After having watched both films I can honestly say that although it is a little bit of both, this remake may not have been necessary but it was still enjoyable enough for me to give it the seal of approval. Our lead detective, Hercule Poirot was extremely strange and almost a hunchback when Albert Finney played him in the 1974 film but I think Kenneth Branagh does a better job by staying true to the character and making him more tolerable and easier to swallow by not making him too much of a freak. Most of the characters in this adaptation were fleshed out better than they were in the last telling of this story. The only glaring exception to that rule was Penelope Cruz’s character, whom actually was a lot less developed in this film and that character had more to work with in the previous film. Comparisons aside, from a technical standpoint, there is a lot to like here. The production and costume design are very solid and the score wasn’t the most memorable but I did like what I heard. The story is a solid one, which is why it continues to get told and you have to hand it to Agatha Christie when she wrote this novel at the time in history when she lived with how women were viewed and treated and not as educated to create this was genius. I was skeptical about Josh Gad and Johnny Depp but they both played their parts well enough to not annoy me. It was also nice to see Daisy Ridley finally in a non-Star Wars role and see her show that she isn’t just a one trick pony. The film tied together nicely at the end and I am actually glad to see they are making a sequel based off another Agatha Christie novel with Hercule Poirot (“Death on the Nile”) since he was the most fascinating part of the film and seeing how he solved the mystery. There was a painfully eye rolling moment near the beginning which involved a cane in a wall taking someone out that I really wish would have been taken out of the opening scenario but luckily it happens early enough that hopefully people will forget it happened as the film goes on. This is a decent movie that won’t blow anybody away but is a solid way to kill a couple hours with its fun cast, interesting mystery and lavish visuals.