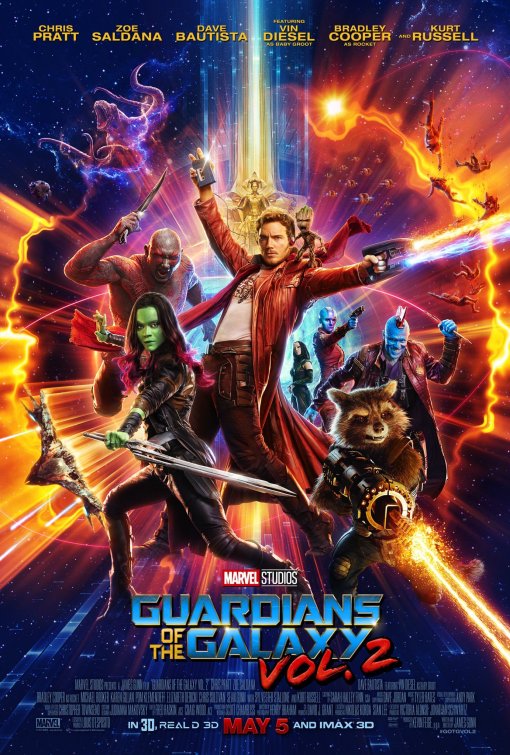 8.5/10 What a fun way to kick off the summer this film was. It is rare that I get to watch a movie as an adult and not only enjoy the Hell out of it, but look around afterwards and see a bunch of children (who thank Christ stayed quiet the whole movie) who loved it as well and made them so happy. Not one dissatisfied customer that I could see. The film kicks off right away with the best opening scene of the year so far with music from one of my favorite bands, the underrated Electric Light Orchestra and their hit, “Mr. Blue Sky.” From there the fun never lets up. This film takes what worked from the first movie and builds off of it. The character dynamic works great as we see the group argue and also work together. I love the character interactions between Yondu and Rocket, Quill and his father and Gamora and her sister. Baby Groot is also ridiculously adorable. I often complain about characters not being developed in movies enough. This is not one of those times. The visuals and use of color was extremely well done and the soundtrack was even better than the first film (which is saying a lot because the first film’s soundtrack was one of the highlights of the film). When it comes to Marvel films, the biggest overall problem has been the formulaic, forgettable, disposable villains. This also puts a (temporary) stop to that by providing a memorable villain who is closely tied to a main character which raises the emotional stakes as well. Speaking of emotions, this film had me laughing throughout and holding back tears at the end. Well done, James Gunn. This film is not without its flaws though, even though they are minor so let’s take a quick look at them. Part of the humor is a problem. Although half of it works and genuinely had me smiling or laughing, they put in way too much humor to where the other half of the jokes fell flat. Like when they are rolling out a golden carpet for the golden lady and it gets stuck. Is that supposed to be funny or just waste my time? The “Taser Face” joke went on way too long and wasn’t funny to begin with. If they cut out half the jokes that didn’t work and just left in the good ones, it would have strengthened the film. There was also a very minor plot hole involving that gold woman too. Finally, there was a disgusting amount of product placement in this film. Marvel is extremely successful and has enough money to where they don’t need to be sell outs to corporations like this. Ford, Sony and by far the worst of all, Dairy Queen for not only belligerent product placement but the fact that the same DQ is in the same place in the film 30 years later. With all the economic ups and downs over a 30-year period in America, I have a hard time believing that the same DQ is still in the same place. Product placement and failed attempts at humor aside, this has beat Beauty and the Beast for the most fun and enjoyable film of the year. A solid storyline and villain, great character growth and interaction, amazing visuals and pacing, etc. combine for one of the best Marvel movies and one for all ages.